Customer satisfaction is our highest priority, so we would like to invite you to take part in our customer survey.
Please take a moment to help us improve our processes and services.

5 modern facade types on which rope access technology is possible 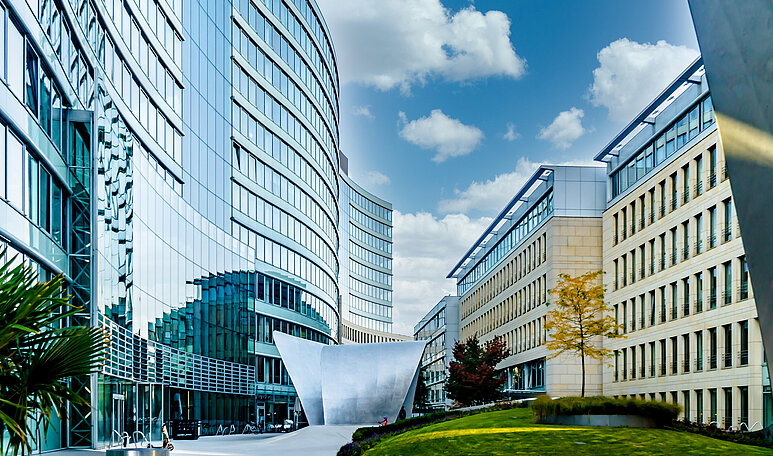 Every facade is unique and has its own special requirements in terms of safety, because each building shell must be cared for, serviced and, where necessary, repaired. In order to avoid the illusion of safety, a sustainable safety concept is therefore absolutely essential.

On many modern facade types, rope access technology can be a suitable solution. This is a flexible access process in which the user moves horizontally, diagonally, or vertically along the facade on ropes.

In this blog, we would like to introduce to you 5 facade types where we have already gained experience in the past and were able to apply fall protection using rope access technology.

In practice, to provide natural illumination for a building flooded with light, glass facades are frequently used. The unobtrusive design of the attachment for such a facade creates the impression of a level glass surface. Climatic conditions, energy input/loss, ventilation, sound insulation - these are financial and environmental criteria which play a role in the decision for or against a glass facade.

INNOTECH USE CASE: A glass facade was implemented at the University of Wuppertal. Its maintenance and cleaning is performed using rope access technology via a TAURUS rail system. If the user accesses a ladder, for example, to perform his activity, then without rope access technology, it is necessary to provide protection against a fall.

Tip from the experts:
The earlier that you plan for the safety system in the early project phases, then the more feasible it is to install invisible facade protection.

Energy-optimised construction based on intelligent solutions is increasingly coming to the fore in modern facade design. This is how, for instance, intelligent facades (often known as dynamic facades in everyday parlance) can use their modules to create shade where the sun shines with the greatest intensity.

Other costs arising in terms of spatial cooling (keyword: air conditioning system) are thereby reduced, and in turn reduce the building’s energy consumption. At present, the most important technology is power generation using photovoltaic modules which form the actual facade.

INNOTECH USE CASE: An intelligent facade was installed, for example, at the Leoben Justice Centre. The highlight of this project is the narrow space within the facade structure. If the window casements on the facade are opened, protection against a fall must be provided.

In theory, the process of rope access technology could be used for this. A prerequisite for this would be a tall and narrow storey where work using ladders is not possible. If a seat board is used, it is possible to move up and down on the facades.

Urban and vertical farming represent interesting concepts for future agriculture because greening, i.e. planting on the facades, is not just a visual eye-catcher, but in urban areas it also provides a cooling effect from the moisture released into the air by the plants. They also filter harmful substances and protect against noise, heat, and cold.

INNOTECH USE CASE:  Jewel Changi Airport makes it clear that a breath-taking piece of nature can be created even within an airport. It is not a greened facade in the classical sense; nevertheless, fall protection must be provided on this indoor urban farming too.

If rope access technology is used for this, then sufficient space needs to be created between the fall protection and the greened facade. The installation of spacers (e.g. STA-10 posts) is therefore recommended. The use of these fastening measures avoids damage to the greening of the facade.

Two levels, two functions. The double facade consists of an internal primary facade and an external secondary facade. While the inner level predominantly provides heat insulation and represents the closure of the usable area, the external level shields from environmental effects.

Usually an intermediate space located between the two levels of the facade operates as a thermal buffer, because the air within this space is warmed by solar radiation.

INNOTECH USE CASE: The Leoben Justice Centre has such a double facade. As soon as this opens, protection against falling is required. In theory, for such a double facade, the cleaning and maintenance of the external secondary facade could take place via rope access technology (TAURUS rail system), although this was not the case in the actual example.

As a whole, the prefabricated elements, usually the height of a storey, create an impressive panelised facade. These individual elements are brought to the construction site and inserted into the building shell, at least at storey height. They are suitable for a uniformly designed facade surface which covers a large area. Panelised facades can consist of glass, steel, aluminium, etc.

INNOTECH USE CASE: The Elbphilharmonie Hall in Hamburg consists of a panelised facade. In contrast to other facade types, in this case rope access technology must be planned for from the very start, because retrospective installation is not possible. Depending on the aesthetic aspects, for rope access technology it is possible to choose between anchor points and a rail system.

In addition to those listed, there is of course a whole range of other facade types, such as facades of wood, steel and aluminium, facades with integrated solar panels, heated facades, and many more. In addition, very varied combinations are used in practice. For example, a panelised facade is often combined with a glass facade.

Regardless of the facade type, advance planning always provides the possibility of aesthetically pleasing and cost-effective facade safety systems. Because, like much else in the building industry, retrospective installation is associated with relatively high cost and effort.

What is rope access technology and what are its benefits for facades?

Safety & beauty on facades - no problem with rope access technology.

7 tips on installing concealed fall protection systems on façades, with or without rope access technology

Safety systems should not spoil the aesthetics of the façade. Nevertheless, they are important for maintenance…

Correct planning and implementation of rope access technology on facades